WHO IS OSCAR THE GROUCH?
Ever since he first appeared on the scene in 1969, Oscar has been one thing, and one thing only: a Grouch. Grouchy, grumpy, mean, musty; every day, Oscar represents everything that a Grouch is. He lives in a trash can in between 123 Sesame Street and Big Bird’s Nest, surrounded by piles of trash. The one thing that annoys him the most is when someone bangs on his trash can and bugs him with some gooopy, yucky happiness. Yes, Oscar is truly the grouchiest of Grouches in our time.

Oscar’s distinct green appearance was not always how he looked. In his very first appearance and throughout the first season of the show, Oscar was a bright orange color. It wasn’t until just before the second season when Caroll Spinney was appearing with Oscar on The Flip Wilson Show that he and the rest of the world discovered Oscar’s change of tone. Designers changed him to the green color he is today. Caroll, having to ad-lib on the fly, developed a storyline for Oscar involving his color change coming from a terrible weekend at the Grouch spa: Swamp Mushy Muddy. He has been the rotten green color ever since. 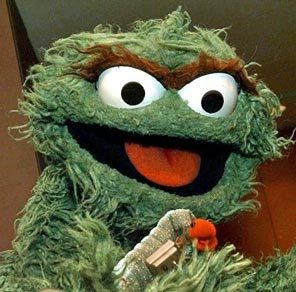 Oscar represents the opposite of everything else Sesame Street is. While the Street where he lives is sunny and cheerful, Oscar is grumpy and angry. Though he may seem to truly loath the Street, he does often show a sense “love” (or as close to love as Grouches can get) for his home. He has even struck up a few friendships in his 40 years on the happiest street in the world.

Perhaps Oscar’s closest friend is his pet worm, Slimey. Slimey has appeared alongside Oscar many, many times. In the final clips of the show in recent seasons, Oscar has read “Trash Gordon” stories to Slimey to announce the sponsors of the show for that day. Oscar has even been seen showing compassion for the little worm, supporting him in sporting events, astronomical expeditions, and more. 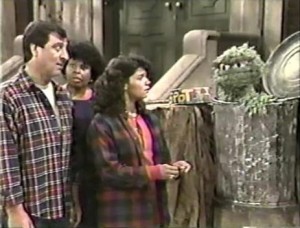 Oscar has also developed an odd bond with Maria (Sonia Manzano). Maria has been known to fall victim to Oscar’s pranks quite often, sometimes getting sprayed with water by his pet elephant, Fluffy. Oscar even has a ridiculing nickname for Maria: “Skinny.” But despite all of this, Maria and Oscar still share a bond. After Maria and Luis were married, Oscar commissioned the Grouchketeers to make a sign reading “JUST MARRIED” for the newlyweds–he even let them drive his prized Sloppy Jalopy! Oscar was also the first person Maria called from the hospital after her daughter, Gabriella, was born on the show.

Oscar and Telly also have an interesting relationship. They have been paired numerous times; such as in Sing Yourself Sillier at the Movies. Telly also rode with Oscar in his Sloppy Jalopy on his search for Big Bird in Follow That Bird. They even had their own segment on the show called “Ask Oscar” in which Telly would field questions from kids wanting to ask the Grouch a question.

Through the years Oscar has become a vitally important part of Sesame Street. He even saved the Street once in Stars and Street Forever, the 25th Anniversary special. He has had a major role in both of the Sesame Street feature films, Follow That Bird and The Adventures of Elmo in Grouchland, and continues to play a crucial role in most of the episodes during the seasons of the show. 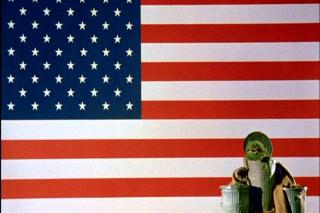 OSCAR THE GROUCH AND CAROLL SPINNEY

Caroll Spinney has performed Oscar from the very first episode of Sesame Street back in 1969, and continues to perform him in 2009, 40 years later. Caroll also performs Big Bird, who is the exact opposite of Oscar. Caroll has grown so fond of Oscar over the years, in fact, that he gave him a special section in his autobiography, The Wisdom of Big Bird (and the Dark Genius of Oscar the Grouch). Oscar was the character performed by Spinney in most of his live appearances touring for the book. Oscar also appeared with Caroll during Jim Henson’s Memorial Service and at the Daytime Emmy Awards earlier this year.

Caroll has remarked that “[Oscar]’s not a villain, not horrible, not into spiders and ghoulish stuff, and although he can be rude and mean, he fundamentally has a heart of gold.” It’s obvious that Caroll cares a lot for his character and truly loves Oscar–even though he’s a Grouch.

OSCAR THE GROUCH SONGS
Even though he’s a Grouch, Oscar still enjoys engaging in a song or two–as long as they’re not sweet, and cute, and nice. Blech! Most of Oscar’s songs sing the praises of trash, but some of them just sing the praises of being a Grouch.

WHY DOES SESAME STREET NEED OSCAR THE GROUCH?

It’s plain to see why Sesame Street needs Oscar. If they didn’t, he wouldn’t have been a lasting part of the show for 40 years. He has been there for all of the greatest moments: Maria and Luis’ wedding, Gabriella’s birth, Abby Cadabby’s arrival (even greeting her with his trademark “SCRAM!”). Oscar’s dichotomy of “Whenever I’m mad, I’m happy–but whenever I’m happy, I’m mad!” makes him a very deep character as well. Freud would have a heyday with the Grouch.

But Sesame Street needs him because he provides a balance. Oscar is the sour to the sweet, the rain to the sunny days–and everyone knows that the world can’t survive without rain. Oscar shows children that it’s okay to be grouchy. He proves that no matter how much of a grump you are, people will still love and accept you for who you are. He teaches understanding, he teaches personal satisfaction, and he teaches how to be a darn good grouch.

Oscar the Grouch is as much Sesame Street as Big Bird, Elmo, or Cookie Monster. He’s just… the grouchier, dirtier side. And that’s just the way he–and we–like it. There is a reason Oscar hasn’t changed in 40 years, and that’s because he is a nearly perfect character. So let’s have a big “BOO!” for the Grouch, shall we? 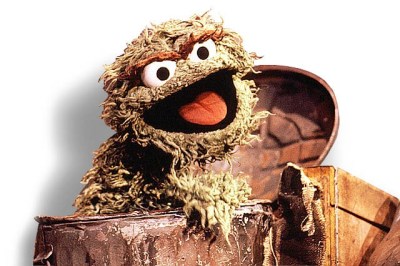