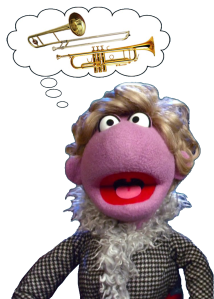 Various, including Rashida Jones in The Muppets

Most Recent Appearance…
Muppets Most Wanted (2014)

WHO IS TRUMPET GIRL?

Trumpet Girl is a lavender-colored Whatnot with short, curly blond hair. She is exactly what her name states—a girl who plays the trumpet. She’s a rather long-lasting minor Muppet, having appeared in the first season of The Muppet Show and resurfacing again in The Muppets in 2011. Trumpet Girl did her thing in the first four seasons of The Muppet Show, until fellow squinty-eyed trumpet player Lips showed up and stole her thunder, after which she switched to the trombone.

For the first four seasons of The Muppet Show, Trumpet Girl’s eyes were perpetually closed, which makes one wonder how she could read her sheet music. It’s very possible that Trumpet Girl is such a great musician that she doesn’t need any sheet music! Her eyes opened permanently in the fifth season and have stayed that way since.

A lavender-colored female Whatnot with short, curly blond hair and closed eyes appeared as a chorus girl (along with Miss Piggy and a brown-haired Janice) in the original opening theme and several early At the Dance segments. We can assume that this is Trumpet Girl, because how many other lavender-colored female Whatnots with short, curly blond hair are there?

After 1981, Trumpet Girl completely vanished off the face of the earth until she and several other obscure characters were rebuilt for 2011’s The Muppets. She—what else?—played the trumpet in this movie and sang in the “Life’s a Happy Song” finale with Lips, Nigel, Sam Eagle and Crazy Harry. In one scene of the movie, she was performed by actress Rashida Jones, who, in addition to playing Veronica (the CDE Executive in the film), doubled as a puppeteer extra. Jones also gave Trumpet Girl a real name for the very first time: Dolores.

WHY DO THE MUPPETS NEED TRUMPET GIRL DOLORES?

Well, the obvious answer is that the Muppets really need someone to play the trumpet. But then one could argue that that is Lips’ job, or Gonzo’s. But music plays a very big part in the Muppet world, so any talented musician is welcome and appreciated—especially female musicians, with the only other one being Janice. Since Trumpet Girl was used in the last Muppet movie, chances are good that she’ll show up again in Muppets Most Wanted. Whether she’ll actually speak or not is unknown, but we can be certain of one thing: she’ll play the trumpet.