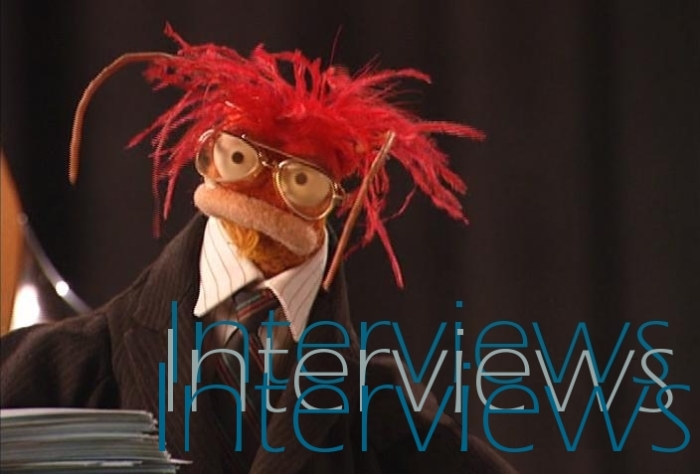 KEVIN:   What was it like to meet Jim Henson?

GABRIEL:   Very cool! Jim was a real person in the sense of what he projected on TV as himself was really how he was. A super nice shy man.

There was a time we were doing a Muppet Meeting Film and I had just finished having milk and Oreos with Frank Oz and behind Frank, Jim was sitting down watching a replay of what we just taped, but he couldn’t hear it so well because everyone in the room was talking. So Jim got closer to the monitor to listen to the replay, probably about 12 inches from the monitor.

He still couldn’t hear the replay, so he got even closer to the monitor and still couldn’t hear it because of people talking. He called over his assistant, Rita Marie Peruggi, and Jim in a shy polite whisper voice told her; “Can you tell every one to be quiet?” Rita Marie stood straight up and yelled full blast “SHUT-UP!!!!” Everyone quieted down. Jim wasn’t expecting that from her. He sunk into himself in the chair and shied away from that situation to watch his replay. Considering he was the boss, it wasn’t in him to tell people to quiet down. 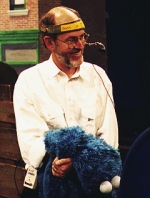 When I was having the milk and Oreos with Frank Oz, I told him how I joined the company, that I wrote him a fan letter and he saw to it that it was put in a future audition file. I was very humble and gracious in my thanks to him. Frank’s response: “You’re lucky I didn’t write back to you and tell you to go f**k yourself.” I wasn’t expecting that kind of response at all. Frank went on to explain that he was sick and tired of people writing to him asking if they could join the Muppets.

KEVIN:   Other than Jim, what other original Muppeteer would you have liked to spend time with to know better and why? 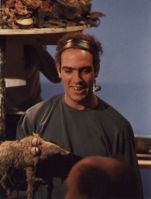 GABRIEL:   I guess all them. But Richard Hunt was insanely fun. One time Richard told me how much he admired Brian Muehl for being brave enough to leave the Muppets and pursue his own career. He wished he could have done likewise. I was surprised at that because I thought Richard had the ideal job! Thank God he stayed!

One of the things I admire about Richard Hunt was how he delivered dialog, primarily on Sesame Street. The Sesame Street dialog usually isn’t funny, but Richard made it funny! Everything out of his mouth became funny. After his death, I could see that of the sketches just didn’t seem funny anymore.

One time Richard worked a character on Sesame called Ari, a blind Muppet. He portrayed it very sensitively on the show. He was asked once; “Whatever happened to Ari?” Richard replied; “I don’t know, but last time he was seen he was crossing Sesame Street into heavy traffic!”

KEVIN:   Who is your favorite Muppet and why?

GABRIEL:   That would be Rowlf. Just loved him as a kid on the old Jimmy Dean show. As much as I love Rowlf it’s one of the few Muppet voices I can’t do.

KEVIN:   Which Muppet do you relate to the most, and why?

GABRIEL:   That would be Kermit. He’s a down-to-earth dude.

KEVIN:   What was it like the first time you walked onto the Sesame Street set?
GABRIEL:   They’ve changed studios, but the first time I was on the set, I was told to go through a back door and it was those big green garage type doors next to Hooper’s. Just like that, I was “On the Block!”

KEVIN:   Did you share a birdseed sundae with Big Bird at Hooper’s Store?

GABRIEL:   Nope, but the first time I saw the Big Bird costume (stored on a poll) next to his nest, I gave it a hug. It’s kind of silly also seeing Spinney walking around only with the Big Bird legs on. Really sweet man the times I met him.

KEVIN:   You also performed Osvaldo the Grouch on the show. Was it easier to assign a voice to Osvaldo then it would be to perform an already established Muppet?

GABRIEL:   Osvaldo was not a well known character so giving him a completely new voice wasn’t a concern for the show’s producers. I tried to base it on what Spinney had originated, based on the Grouch attitude. It would be nice if they brought Osvaldo back.

KEVIN:   Any fun or funny stories to share from working on the Street?

GABRIEL:   There was a story Richard Hunt told about someone who worked on Sesame who had really bad body odor. Seems Richard didn’t know how to approach this person to tell them. And others knew this person stank as well. Someone got the idea if all the cast and crew filled up this person’s locker with roll-on deodorant. Richard said that they all watched the next day from far away as this person opened their locker and all these deodorants tumbled out. He said there where so many it would fill a table. No one knew how this person would react, but the person understood and had a good attitude about it and started using deodorant after that.

There was a story Lisa Henson once told me about a lady who auditioned for the Muppets and didn’t know what to improvise. Lisa encouraged her to try anything and this lady improvised how much she hated her mother and worked her way into a freaked out mental state and was escorted out. Whew!

Oh! Here’s some good Muppet trivia. Jim Henson once told me that Sigourney Weaver, when she was an unknown, auditioned for the Muppets. And I got to meet and share a few emails with Jerry Juhl as well. Positive humor the man had.

KEVIN:   What does it feel like to see a character you originate perform in a show on TV?

GABRIEL:   I always have the same thought… “I could do it better.”

KEVIN:   As a Jim Henson Company performer, what values did they instill in you while you worked with them?

GABRIEL:   In a nutshell, before I joined the Henson company I saw the world as black and white… they filled my world with color.

KEVIN:   How do you feel inside when you perform on Sesame Street?

GABRIEL:   Just get in there and do it and all the butterflies are gone

KEVIN:   What were your inspirations and references for creating the personality for Dani in “’A’ is for Asthma?”

GABRIEL:   Developing a voice for a 5-year old wasn’t easy and perhaps I didn’t succeed with attaining it in the beginning. It got much better when we went on tour. Since I had to sing in this video, I worked on a singing voice first and worked a character voice around it.

KEVIN:   What do you think Dani could add to the show as a regular character today?

GABRIEL:   The obligation/need for caring for another who might need help.  Teaching a child how to get help while maintaining their safety would be a good lesson.

GABRIEL:   I’d like to do cartoon voices someday. I had Dreamworks checking me out sometime back.

KEVIN:   Henson’s Place is now on DVD. You have a listing for your part in it on IMDB. Some of it was cut from the DVD. Can you please describe the part of the DVD which was cut?

GABRIEL:   One scene that didn’t make the final DVD was a singing improv scene with Jim looking on.  That would have been nice to have seen again.

KEVIN:   You were the Henson’s company first Hispanic puppeteer. 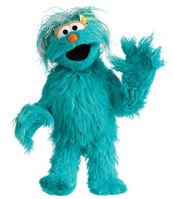 GABRIEL:   Yes, Jane Henson did her best to convince the producers of Sesame Street back then the need for a Hispanic Muppet character. I truly believe the producers at the time accepted me on Sesame as a favor to Jane, but it was obvious during that era of Sesame that wasn’t a direction the producers were willing to accept with a Muppet. Years down the road, they saw the light and Rosita was created.

But one shouldn’t be labeled as a Hispanic puppeteer.  Just as a puppeteer that can get the job done. Hollywood has a history of stereotyping Hispanics, and I have to always continue to open the eyes of Muppet management (and other firms) to give me an equal opportunity. I would love to see Disney’s Muppets develop a Spanish character for myself, more humanoid like Scooter. And not just the tasty king prawn Pepe.

KEVIN:   How do you see the future of The Muppets as a whole?

GABRIEL:   The characters will live on I’m sure. Outside of that I have no clue. I’d like to see job stability for all Muppeteers not just the stars of the company. As an occasional Muppeteer I do firmly believe in training. When Jim was alive there was a home base for occasional training. Now it seems you have to know your stuff when you are called in. Clash and Robinson did the right thing having a week long Sesame puppet training session two years ago for about 40 people. It’s great when everyone learns from the pros and from each other. It will make better puppeteers long term. I hope Disney with their large home base starts having Muppet training sessions for Muppeteers by Muppeteers on a semi-regular basis too. I would like to see Steve Whitmire head up a Muppet training workshop. After all when you buy a car you have to keep it tuned.

KEVIN:   Anything else you’d like to add in conclusion?

GABRIEL:   Yes, with every Muppet performance there is a wonderful support staff of people. Also the cameramen on Sesame are true artists on how they work those cameras. They add to the Muppet performance. All those folks do a lot to make the Muppets look good. 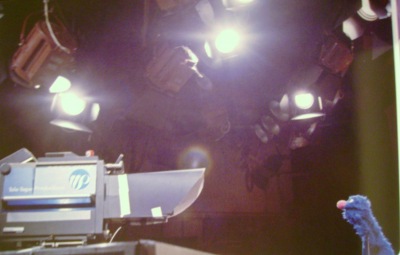 The Muppet Mindset would like to thank Gabriel Velez so very much for spending some time being interviewed for us! We appreciate his contribution and friendship! Thanks also to our good friend Kevin Williams for conducting the interview and being extremely supportive and awesome!