Most recent appearance…
The Muppets: A Celebration of 30 Years (1986)

WHO IS YORICK?
Yorick is the hungry Muppet skull best known for consuming Kermit (and occasionally other characters) in Jim Henson’s classic “I’ve Grown Accustomed to Your Face” sketch. The sketch was performed on many shows, including The Ed Sullivan Show (twice), The Jack Paar Show, and The Dick Cavett Show.

Yorick is one of the first Muppets built by Jim Henson in 1954. He is also one of the most deceptively simple Muppets ever built. Seemingly just a purple skull, Yorick is actually built with a tube in his mouth so he can physically eat things (similar to Cookie Monste). While usually only presented as a skull, Yorick was one time shown with a purple hand helping to feed his face in the Sam and Friends sketch “Where Hunger is From.” This is the only known time that Yorick’s hand appears onscreen. 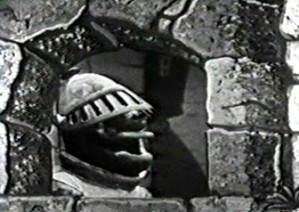 Yorick’s primary appearances were on Sam and Friends. Much like most of the other characters on the show (except for Kermit), Yorick mostly disappeared after Sam and Friends. Which is unfortunate, since a survey taken in Washington, D.C. during the show’s run revealed that he was the most popular Muppet–with Kermit coming in fourth place. Yorick did appear dressed as a palace guard in Tales of the Tinkerdee in 1962.

Yorick’s only other appearance onscreen came in the 1986 special The Muppets: A Celebration of 30 Years. It was a triumphant return for old Yorick, who showed up again to munch on Kermit’s hand. This was the last appearance of many of the Sam and Friends characters, and Yorick was among them. Yorick can be seen with the other Sam and Friends characters at the Smithsonian when the puppets are on display.

WHY DO THE MUPPETS NEED YORICK?
Yorick represents one of the Muppets’ baser instincts: eating other characters. Yorick works as a ravenous monster-like Muppet and clearly inspired many of the other characters that would follow him. Cookie Monster, Luncheon Counter Monster, Mean Mama, and many other Muppets owe their inspiration to the little skull that wouldn’t stop eating. Yorick is funny, creepy, and absolutely delightful.