Mitchell Stein- If you have visited Disneyland California in the past few months, or an avid reader of this marvelous website, you may be aware that Disney’s California Adventure’s version of Muppet-Vision 3D has been vacated from their own theater to make way for a Frozen themed sing-a-long which premiered alongside the Frozen Fun events. We have got word that the Sing-A-Long will stick around past Frozen Fun’s final date of May 15th, which I guess it should really come as no surprise to anyone. Although the fate of the theater is very much uncertain, our source has told us that what they have heard does not bode well for the fate of the Muppets only attraction.

This is obviously very sad news for Muppet fans and for fans of all things joyous and wonderful. Although I have personally never had the chance to ever make it out to the attraction in Disneyland in my lifetime, it makes me devastated to find out of the closure in the sake of replacing it with such a simple and silly attraction, lazily crafted and pointless. I viewed the Frozen show’s identical counterpart live from Disney’s Hollywood Studios and it’s literally a half hour of rehashing the same clips from the Frozen movie, with appearances by the film’s characters only for the finale. You can watch the full show here, and then cry over the fact that Muppets have been replaced with something so utterly ridiculous.

But I’m not here to bash Disney’s lazy cash grabs or be upset about our beloved attraction’s departure. Today, I wanted to pay tribute to the attraction, which opened as a counterpart to the Florida version in 2001 and ran until last November. I haven’t personally had the chance to experience this version in person, but it’s Florida counterpart is something  that remains as a personal favorite and means a lot to me. Much of the reason why I became a Muppet fan was because of my love for this 3D film. I pursued more Muppet movies because of my knowledge for this brilliant Muppet film on some of my dozen trips to Walt Disney World. Muppet*Vision 3D is quite honestly one of the most wonderfully executed 4D films throughout all four Disney theme parks. From it’s hilarious array of “look at we can do” 3D tricks to their wacky one-liners and blend that with some really neat interactive effects and spectacular Audio-Animatronics, you got yourself the classic attraction we’ve all come to love.

There’s so much wonderful things that Muppet-Vision has going for it. Although it’s got its 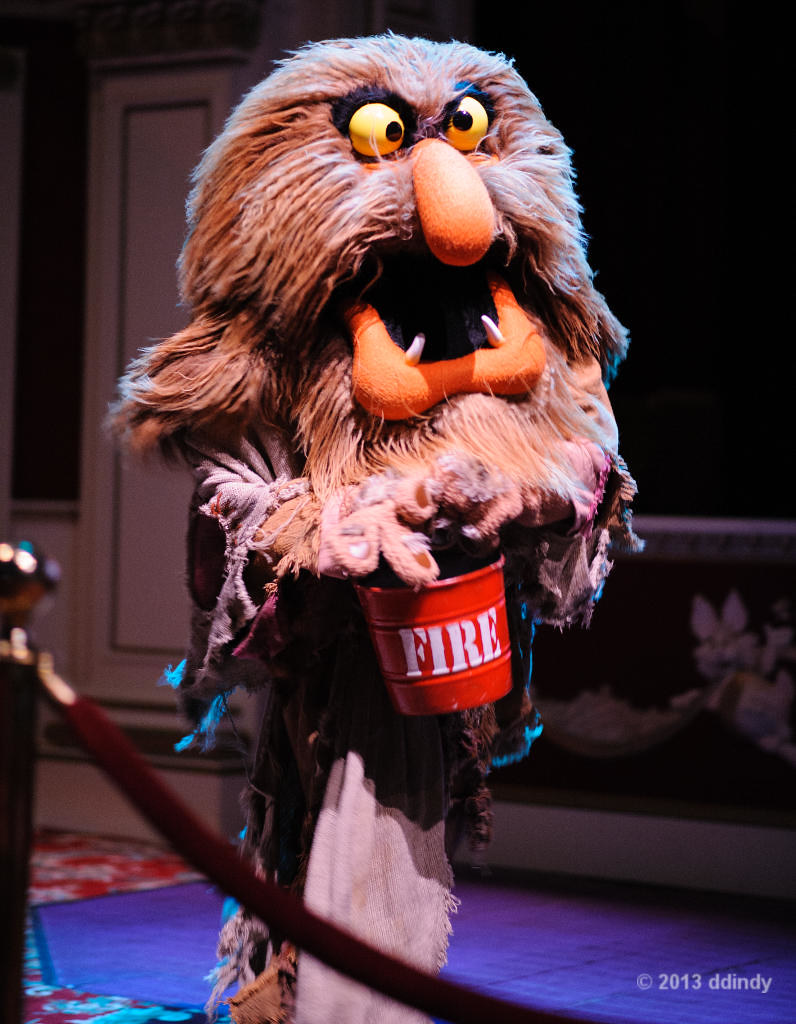 flaws, it really is something marvelous. I think one of my favorite element of the attraction has got to be the incredible amount of detail involved in both versions. On every visit I never fail to find a new hidden gag or reference that I hadn’t spotted before. The queue is so wonderfully scattered with brilliant gags and slapstick humor, that it’s quite easily the best detailed and hilarious attractions in the entire park. The Audio-Animatronics built into the theater are stunning, and the live appearance of Sweetums is enough to make any Muppet fan jump off their seat in delight (believe me, I’ve experienced it first hand).

This film also sees the prominent inclusion of Bean Bunny and Waldo C. Graphic, both returning straight from The Jim Henson Hour and although Waldo is a bit annoying at some points, I think his inclusion was a great idea and I’m such a super fan of the idea of his introduction and his role in this film. Although Bean has appeared in multiple other productions, his biggest and most prominent role is this attraction and he shines wonderfully both on screen and slightly to the left of it.

But the best part of the fun begins even before you enter the theater: Once you make your way out of the queue, you arrive at which is my favorite sections of the entire production: The pre-show. There’s absolutely no question in my mind that this is a production that puts the Muppets at their ultimate best. The brilliant use of Muppets interacting with multiple screens is a great example of the hilarious fourth wall jokes the Muppets are famous for.  There’s just so much that makes this attraction so special and it remains a true favorite of mine ever since my first viewing.

Unfortunately, the closure of the attraction doesn’t come as much of a shockers as the writing has been on the wall for some time now. For several years the Muppet theater has become the temporary theater for various events, like the Frankenweenie sneak preview and elecTRONica events have left the Muppets vacated for a short amount of time, but up against a juggernaut like Frozen, the results will not bode well for Muppet fans. For unexplained reasons, the California version has always scored significantly less visitors than it’s still-popular counterpart in Florida. (As far as we currently know, Florida’s version is safe from closure for now). With a heavy heart we bid farewell to our beloved attraction until we have official reason to believe it’s returning. Until then, we say goodbye to Muppet*Vision in California forever.

Hey, since it’s leaving, would any of you guys like a sandwich? I mean since it’s already heading out it could, wait….FOREVER??

The Creator and Jarrod are sad that MuppetVision3D is closed

8 thoughts on “A Farewell Salute to All Attractions, But Mostly Muppet-Vision 3D”