Jarrod Fairclough Presents: The Ramblings of a Muppet Nerd – Edition Number I Don’t Remember Anymore
A FEW THINGS I NOTICED IN THE MUPPETS
Hello. I’m back. It’s been a while, eh? How are you? You’re looking well. Is that a new sweater? Okay, enough pleasantries. The Muppets came out almost a year ago now, and it’s taken me this long to write an article on it. I’m not gonna review it, or anything like that. But there are a few things I noticed in the film, some of which are yet to be mentioned. These are movie mistakes.
Sure, you can head on over to Muppet Wiki for a pretty extensive list of Muppet movie mistakes. There
are 3 listed for The Muppets, so let’s start with them, shall we? Oh, and look, I can use screen caps!

2.)   During the recreation of The Muppet Show opening, Janice is seen in the orchestra pit, but is then seen as part of the female chorus. At the ending reveal, Janice is nowhere to be seen in the row of female characters she was in.

Okay, so those are pretty much just mistakes. Here’s another one I found NOT on that list, but not that big of a deal… During the “Life’s a Happy Song” finale, after the females sing “We can be whatever we wanna be,” they look to the men. The men sing “Nothing we can’t do.” The lead singer of this is Jason Segel.  Except look at his mouth, he isn’t singing at all.  GASP!

Okay, now here’s the biggest one. This one is either a giant mistake on behalf of the filmmakers, or there was another plot line that got cut.

You’ll remember the scene where the Muppets kidnap Jack Black in a ninja-style fashion. Let’s list the characters in the car before hand, shall we? We have Miss Piggy, Swedish Chef, Lew Zealand, Animal, Fozzie, Gonzo, Scooter, and 80’s Robot. 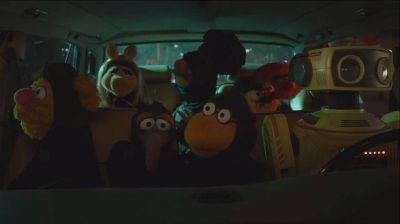 Now, let’s skip ahead to the attack of Jack Black… 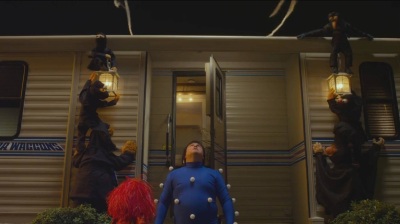 Who’s this guy in the picture below? The other characters are accounted for, and he’s certainly not 80’s Robot. No. I think it’s Walter. Walter, who, during this ordeal, was back in the Muppet Theater singing with Jim Parsons. 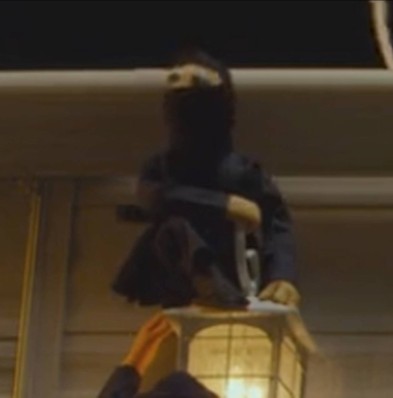 So was Walter meant to join the other Muppets on the heist? Or did someone stuff up somewhere?

Well, that’s that. Someone go put them on Muppet Wiki, please. I don’t know how. Do you think you found a mistake? Let us know!

4 thoughts on “The Ramblings of Muppet Nerd Jarrod Fairclough, Part… We Don’t Remember”